SWORDS OF TEXAS: Too Weird to Live, Too Rare to Die


The EP we're talking about is the first solo work of Schmoog Lebowski, already founding member of "13 Bags of Dick". In this self-produced record you can find sludgy riffs, sometimes in jazz style, with dark and disturbing lyrics. This all was created by Schmoog in the middle of the night in Hamilton, Ontario, with his faithful fellows: "5-string bass, a 4-track recorder, beat software, and an old keyboard leaning up against the wall" - as his Bio describes. Add to this something good to smoke to open mind and spirit and you'll see this five-tracks EP taking shape from the cloudiest sludge.
Schmoog is the force and mind behind the project, even though he sometimes gets some help for his live performances. He is then "Swords ox Texas'" core.

Unlike the most of the records included in this genre, "Too Weird to Live, Too Rare to Die" has quite short tracks, but their intensity is really deep. Slob sludge alongside dark and space-atmospheres lead us in this trip to the centre of the Universe, where, along with a very "well-charged"* bong and sorrounded by the deepest darkness, we will make a hours-long trip meeting the strangest space-creatures you've ever imagined.
Vocals are smooth, full of psychedelic effects, hence of great impact and able to perfectly fit into the sounds of this work, from its beginning till its end.

First track "A trip with El Cid" starts with a kind of countdown prepearing us to be launched into the unknown, while "The Majestic Purple Bastard" is with no doubt the most remarkable track in the EP: it's an almost entirely instrumental track with a really goddamn sludgy bass line...and that's why we like it ‘assai’**! Closing track "Valkyrie Hymn" is the most ‘space’ track of this EP: its smooth sound and the peculiar effects on the vocals are the features of the interstellar trip offered by this space-cowboy named Schmoog. Its closure is with no doubt ideal for this work, which we're not tired to praise describing it as "SLUDGY".

The only flaw is the lack of a real drummer. This would have made this work even more valuable, but we have to give Schmoog all the credits for having produced a really well-done EP, which, fortunately, distances itself from the classic way of making music.
We wait for the next interstellar trip offered by the Lebowsky Spaceways, in the meantime enjoy!

*in Italian ‘carico’: when you fill your bong/joint with allllllot of grass!
**from Naples dialect, meaning “alllllllot”!

1.A Trip with el Cid
2.El Cid Zombie Chase
3.The Majestic Purple Bastard
4.The Microwaveclock is stock on 12
5.Valkyrie Hymn 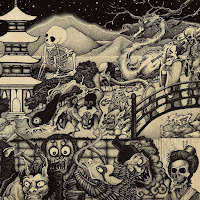