OATHBREAKER: the importance of being Belgian 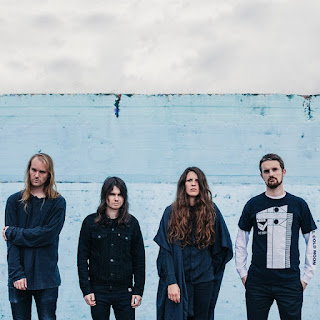 How’s going the tour?
The tour is going great, has been amazing! We did France, we did Spain, we did Portugal, we did Switzerland yesterday, and yeah everything is going really well. This is our first time ever playing in Italy, so we’re really excited to see what it’s gonna happen. The tour will last one month, we’re doing 29 shows and we have a free day tomorrow.

I’ve seen a great growth between the Oathbreaker EP and Rheia, how did your musical backgrounds influenced you?
It’s an hard question, I think in the ep we were super young, we were 18 years old. Oathbreaker exists from 9 years now, it’s normal that there is a certain growth, we’re not listening to the same music anymore as we did before. The most important thing is that we kind of knew how we wanted Oathbreaker to sound, but it took a lot of time to figure out how to make all the separate elements in a one whole. I knew for example that there was a way I could sing normally, not only scream. It was really hard how to figure out how normal singing blends with really fast blast beats, but in this record it was kind of like a search towards where everything combines. So on this record I think for the first time ever we succeded making that sound like we wanted it to sound. For example recording with Jack (Shirley) in San Francisco really complemented what we wanted. Before we recorded we wanted everything to be perfect, all the details had to be there. We didn’t want to sound like a machine or a robot but as a band. He pushed us to feel and to make that record sound like an organic thing, no click track, no nothing, and that’s what we needed, to make Oathbreaker sounds like Oathbreaker. He pushed us towards through something that we played and not something that someone else could have played.


Does the album has a topic around which all the lyrics were written?
Yes, the entire record is around personal experiences of mine, so there’s a lot about how I was raised, a lot of my childhood experiences. Like my grandma died, that’s one of the songs. Everything is self-reflective, before it was too, but now is really in-your-face, more than it was before.

I have the vinyl version of Rheia and there are four artworks representing parts of bodies, why this choice?
I really wanted it because the record is so personal and very open and very human. I wanted the artwork to be something you can almost feel when you touch it, and there are only few things that can do this and that’s hair and body parts, and skin. Those are things that are so human and so we tried to created a kind of second skin on the body. It’s actually wax for candles, we poured that on my body and it was being landed into water. And when the wax touches the surface of the water and you enter your hand for example it will make shapes, it’s super beautiful. But it’s also really hot and really cold at the same time because the water was ice cold so the wax doesn’t become hard and it was really hot. We did that with my entire body and everything burned pretty badly but the result is very nice. It’s like part of the process of reading you know, it’s something that kind of needs to hurt a little and that’s exactly what it was. I really wanted to do myself ‘cause it’so much easier if you do yourself than if you ask to someone else, so much personal. So yeah I wanted it to be this second kind of skin but than also to break out of that skin, so that you like open up. That’s the symbolism behind it.

There is a connection with the videos?
Yes, it’s all connected. The feeling that had to bring up the first video in the people who see it is that it becomes truly awkward. It’s very weird to watch the movie because it’s so almost naked. Usually when we make videos you can’t really see us that much and everything is very covered, this one is very stripped down, very pure and I wanted it to made people feel awkward about it, and that’s really what it does. The lyrics are very in-your-face, and sometimes when you talk about that people get awkward and then when they see the video they feel that, and that’s the kind of feeling I wanted to instill.

You are part of the Church of Ra, which is leaded mainly by Amenra, how this thing influenced you as you also have an Amenra member in your band? What’s the connection you have with Church of Ra and Belgium in particular?
We have a member that also plays in Amenra but before he played in Amenra Oathbreaker existed, so we’re not a side project. The whole Church of Ra is kind of a collective, it’s just people who know each other, we’re all just friends. We share the same musical backgrounds, we share members in different bands. It’s a circle of people who are very open-minded and talented people, it’s really easy if you want to start a new band and there are all this people who are interested. That’s how for example Wiegedood came along. It’s not always the same people and not only about music, it’s like art or photography, graphical things and visual things. There is a lot of people who is interested in kind of the same things and even if they’re not interested in the same things they influence each other because they’re into different things. For example I work for a lot of fashion brands and I do graphic and visual design for them. There are so many things that we connect on, it’s really not restricted to music only. We all live in the same area and we’re really a bunch of good friends and it’s a really cool thing to have. The bands are also very different, Oathbreaker is very different from Amenra for example, it’s all just good music and good friends, that’s the most important thing.

Before the tour your drummer left the band, in what circumstances? And how did you manage to find another one?
He had a problem with his foot, and the song are really fast to play. I think he overdid himself a little and it was really hard to fix. It took a year to stop it from hurting but still when it didn’t hurt anymore he couldn’t control it as he did before because he couldn’t play for that long. Wim was the drummer for Rise and Fall and Wiegedood, and he was a really good friend of us and joined us in many tours, sometimes to drive, sometimes to do lights. He was always with us so we knew he was the only one who could do it ‘cause he’s an amazing drummer. Ivo had also his job which he didn’t really want to give up, and we understand that but we all had this point in which we wanted to tour full time and play as much as we can and he couldn’t so we all knew this point was going to come. It was more like when and how and how to fix it as soon as possible. Wim joined us in the states and he’s gonna stay drumming, I think and hope he’s going to be a permanent member.

How did you manage to use female vocals in a world in which there are so many male vocals?
I don’t know, I’m just a woman, I didn’t choose to be a woman. We started this band and to me it’s nothing weird. The more you stress the fact that there is a woman in a scene where there are only men, it becomes even more that way. I feel that there are a lot of women in bands. There are a lot of men who thinks there are not enough women but there are. I’ve never been obstructed because I was a woman in a band, I had as much opportunities as I had if I was a man. It’s just something you work towards. You work hard and you try to do as much as you can and I’ve never felt weird or something because I was a woman, it’s just something that happens.

What kind of band are you and how do you live the tour life?


I don’t know, we just spend a lot of time in the van, we drive a lot. We play everyday and it’s been really tough, tomorrow is one day of and I’m really excited about that, just to get some rest and sleep as long as I can. The most important thing for me is to eat good and sleep good because it helps when I’m tired, these are the only things that I need. If a sit in a van for 15 hours it doesn’t really matter as long as I can sleep at night. I can’t get sick, it’s really important, I can’t drink too much. I need to take care of myself and my body and that’s normal. It’s a very intensive job that we’re doing, and your body starts to feel that and you need to take care of it.
Pubblicato da Sebastiano Liso a 14:51