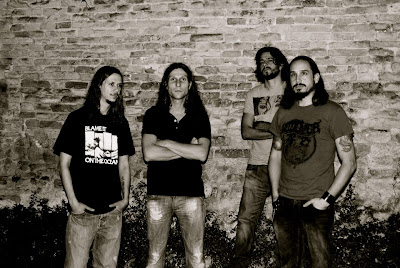 Void of Sleep is a band hailing from Ravenna, Italy, formed in 2010 by Gale (guitar), Burdo (vocals and guitar) Allo (drums) and
Paso (bass). In a few months the result of many rehearsal is a blend of sludge, psychedelic, stoner and progressive sound where epic rhythms
melt with doom slowdowns, complex time signatures and “musical storms”. By the end of the year, after almost eight months since the new
line-up had been defined, the band makes its first live appearance and in the following months it shares the stage with many international
bands. In June 2011 it's time for the band to enter the Studio73 to record their debut EP under the direction of bass player and renowned
producer Paso (winner of an Independent Music Awards in 2012 and also producer for Ephel Duath, Extrema, At the Soundawn, The Secret,
The End of Six Thousand Years...). The three-songs Promo EP called “Giants & Killers EP” immediately generates excellent and positive
reactions. In the meantime the name Void of Sleep takes a solid reputation in the local underground, and in the summer of 2012 they hit
again the Sudio73 to record the first full-length called “Tales between Reality and Madness” an album of seven tracks for about 45 minutes of
music. Void of Sleep then signs a worldwide contract with the label “Aural Music” to release the album in January 2013.
The debut album was critically acclaimed by the press from all over the world and the guys are still playing gig to promote their work.