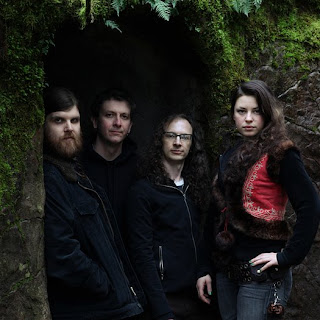 In 2009, Uta Plotkin added her voice to Witch Mountain in front of a triumphant sold out crowd at Portland, OR's venerable club Satyricon. Supporting Pentagram—East coast godfathers of American doom who also took far too long to receive their rightful due—Plotkin brought the necessary ingredient that Witch Mountain founders Rob Wrong and Nate Carson had been seeking since they initially formed the group back in 1997.
Originally far out of step with the lazy, indie-rock scene in Portland, guitarist Wrong and drummer Carson sought to put their own stamp on the tradition of doom metal as laid down by Black Sabbath, Candlemass, Trouble, and Saint Vitus. Years of road work in support of peers such as High on Fire, Spirit Caravan, Electric Wizard, YOB, Weedeater, Eyehategod, and all the rest had granted Witch Mountain a solid footnote in the history of one of music’s heaviest genres. And though real life careers took the band largely out of commission between 2003 and 2008, Plotkin’s emergence kicked the band back into a high gear that shows no signs of waning.
With renewed vigor, WM returned to the studio to capture the long-awaited sophomore album South of Salem. Produced by master “engine-ear” Billy Anderson (Sleep, Neurosis, Melvins), the record was self-released by the band on vinyl, and shortly thereafter recognized as the "#4 Best Metal Album of 2011" by NPR. With a SXSW showcase, west coast tours with Christian Mistress and Wino project Premonition 13, and a massively downloaded Adult Swim compilation under its belt, Witch Mountain proved its modern work ethic and soon signed up with dream label Profound Lore.
Once South of Salem was unleashed on CD and properly distributed, it was time to follow up with all new material. 2012's Cauldron of the Wild was the answer, produced once more by Billy Anderson, and this time featuring a further matured sound and more immersive influence from Plotkin. Rob Wrong was writing the best, heaviest blues-metal he’d yet conjured, and Carson--as both manager and booker--kept the band grounded in a professional DIY ethic. New bassist Neal Munson fit like a glove, and overall the group has never fired on all cylinders so successfully.
An invitation to play the main stage at Scion Rock Fest 2012 along with Sleep, Saint Vitus, and Down gave the band an opportunity to return to US stages, successfully headlining in the US and Canada for most of June. In August, Scion invited the band back to the studio to cut a brand new single, and sponsored the band’s most extensive tour to date—a 5 week headlining trek around the US in Oct/Nov. The groundswell of new fans brought about by touring, social networking, real word of mouth, and heavy-handed press gushing from outlets like Pitchfork and SPIN magazine continues to gain the group new fans in an era when Doom Metal is no longer a synonym for obscurity.
Following the release of the “Bloodhound” single, the next frontier was Europe. WM took the continent by storm, from Poland to Iceland in Spring 2013. Dates were shared with East coast sludge-masters Cough, with gigs centering around Holland’s Roadburn event, as well as the Desert fests in Berlin and London. With a final stop in volcanic Iceland, the group flew home to work on the follow-up to Cauldron of the Wild, and play a few hand-picked support slots for the likes of Blue Öyster Cult and Candlemass.
For a doom metal band that took the path of longevity, learned from other bands' mistakes, never signed the easy contract, kept in charge of its own destiny, and rightfully owns all its material to date--the future looks bright indeed.